Tuberculosis : new challenges
Tuberculosis (TB) is one of the most ancient diseases of mankind

TB has been mentioned in the Vedas and  Ayurvedic scriptures as kshaya rog. In 1993, WHO declared TB to be a global emergency and devised DOTS strategy. In 1997, the Revised National TB Control Program (RNTCP) was launched and adopted this strategy. In year 2005, 0.04% of the TB cases in India were diagnosed and reported as MDR-TB, which rose to 0.15% (~4 times) in 2007.
Multidrug-resistant tuberculosis:
·         MDR TB: M.Tuberculosis strain resistant to most potent TB drugs- INH & Rmp.
·         XDR TB: Extensively drug-resistant TB (XDR-TB) caused by bacteria resistant to INH & Rmp  as well as to any fluoroquinolone and any of the second-line anti-TB drugs (kanamycin or capreomycin).
These forms of TB do not respond to the standard six-month treatment and take up to two years or more to treat with drugs that are less potent, more toxic and much more expensive. Both MDR-TB and XDR-TB are the emerging threats to anti-TB programs.
Drug resistance can be Primary resistance or drug resistance among new cases or Acquired resistance is drug resistance among previously treated cases.
Current protocol for treatment of MDR-TB :
Standardized regimen: Empirical treatment for  previously treated Ist line TB drugs. It  includes essential drugs: Streptomycin, Pyrazinamide, Ethambutol Thioacetazone
2nd line drugs :Aminoglycosides (Kanamycin, Amikacin, capreomycin), Thioamides (Ethionamide, Prothionamide), Fluoroquinolones (Ofloxacin, Ciprofloxacin), Cycloserine/Terizidone and PAS
HIV & TB:
In India, 2.5 million people live with HIV and AIDS (PLHIV). This population is 20 - 40 times more likely to develop active TB and is a leading cause of death in them. It accelerates HIV disease and MDR-TB and reduces HIV treatment efficacy. A national policy to coordinate common activities for HIV/AIDS and TB has been formulated by the National AIDS Control Organization(NACO) and the Central TB Division(CTBD) in 2008.
Conclusions:
We have come a long way in our fight against this deadly disease but many steps will have to be taken before we are TB free. WHO with its “STOP TB” strategy has given a vision to eliminate TB by 2050.

Popular posts from this blog

How to keep our Heart Healthy

October 03, 2018
Cardiovascular diseases have now become the leading cause of mortality in India. 25 to 30% mortality in our country is attributable to heart attacks, brain strokes and heart failure. The Global Burden of disease in India is estimated at age-standardized death rate of 272 per 100,000 population. It is higher than the global average of 235 per 100000 populations. The other peculiarities in our country are a younger age at presentation, an accelerated course of disease and high mortality. Preventive strategies are therefore the keys to reduce this alarming trend because once it manifests, most treatment strategies are at best palliative. The World Heart federation and World Health Organization every year has marked last Saturday of September as the “World Heart day”. This year the theme of the World Heart Day is to make 3 Promises. “ Eat more healthily”, “ get more active ” and “ say no to Smoking ”. These three do’s can go a long way in preventing a heart attack and keep you he
Read more 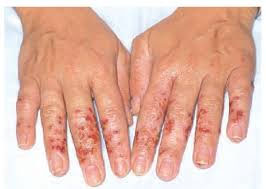 Occupational contact dermatitis is a skin condition caused by work-related exposures. It occurs in workers who are exposed to irritating or allergenic substances or specific physical factors in the workplace. Eliminating or preventing exposure to these agents or conditions can largely prevent the occurrence, and if already present, the severity of OCD. The disease is most common amongst nurses, food handlers, hairdressers and beauty therapists, motor mechanics, cleaners, construction workers and specialized epoxy workers, printers and those within the health care and manufacturing industries. In most western industrialized countries, OCD is one of the most commonly reported and underestimated occupational disease with international estimates of incidence varying between 50-190 cases per 100, 000 full-time workers per year. Specific OCD prevention activities derived from the literature and analysis of the data suggest that the largest gains are likely to be made by targ
Read more